The exhibition went very well.
I had my little station nicely decorated.  Got some good feedback.  No big job offers or anything.
Also, a couple days ago we were having a family barbecue and my step nephew in law was playing with the site and really liked it!  I was very happy with that.  I kind of expected him to maybe be kind of interested but then walk away in favor of something else in a couple of minutes, but he loved the habitat maker.  Just simple things like making big animals small and making the animals sit on each others heads.  He enjoyed printing them out as well.  (which is no longer disabled online).
I got some good additional notes on some user interface and other assorted things that could be improved from that as well as from the exhibition.
Also, and this is super lame of me, the site was not working in Internet Explorer.  I assumed that the computers in school were just lame, but As it turned out my parents could not get it working and they probably use EI.  So I checked that out and fixed the problem (I changed the classid of my SWF object) this morning.  This is probably the reason why the zoo did not get back to me when I mailed them a link to the site a few weeks ago.
Whoops, silly mistake!  Taken care of now. 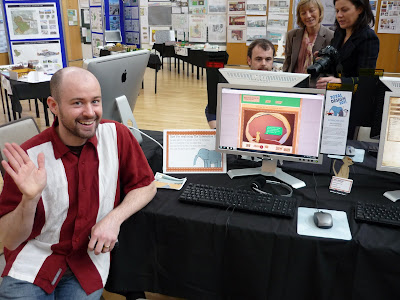 and for my reference, here is a little list of future improvements and adjustments that could be made:

We set up our for the exhibition today and that went well enough.  But I ran into some trouble with my project.

The darn computer will not let me download Safari or Chrome, so I am stuck with Firefox which if you remember freezes up when you try to print (again, only on those computers).

I was going to bring in a printer, but it doesnt look like there is much point.

So I got home today and disable the print feature.

I was also having a problem with the whole application really slowing down quickly and occasionally, the text and image imported to the map from xml in the Map gets stuck on top of the movies and will not go away.

I hopefully sort of fixed this issue, just for the exhibition by remaking the map without the use of XML so it runs directly out of the SWF with the same functions.  I also put a note on there for people to only CLICK ONCE! because over clicking will really slow things down.

URG!!! I was hoping I could relax by now.
Posted by Michael Mohler at 1:10 PM No comments:

ol' wifey made this for me today.
Nice little addition for the exhibition. 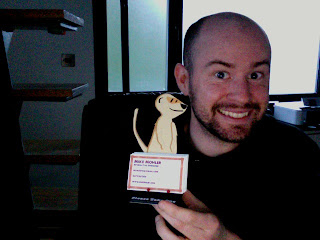 Posted by Michael Mohler at 1:33 PM No comments:

A flurry of work this weekend adding some sound and fixing little bits and pieces.

I got my wife, brother, and sister to do some voice work for the animals.  I'll also add a voice when you hover over buttons.

Aside from that I have done some work on the iframe so I can moderate the comments a bit and so something different appears on the map and builder.  There are some other little changes as well.  Stuff just keeps coming up!

If I have time I want to make it so the iframe does not register in the browser history.  I can do that with a bit of javascript I think.  Another odd problem is that occasionally, if you click on the map buttons too fast the animal image and text that pops up moves to the front of the display and never goes away even when new movies are loaded.  I don't even know where to start with that, so i'll not worry about it right now.

I have the sound mostly done, I just need my sister to give me the elephant voice.
I need to finish my final report.  I have a lot of words right now, but it is a big mess.  I am also getting some business cards prepared for the exhibition.

ALMOST DONE!
Posted by Michael Mohler at 9:32 AM No comments:

Yeah I have been quiet

I have spent the last few days mostly working on the webpage.

Tomorrow is the presentation so I prepared a bit for that.  I submitted the website to the critical eye of my wife today and got a stack of sticky notes on mistakes, suggestions, and things that need to be improved so I am pretty much working on that today.  It is mostly for the written content.  Misspellings and suggestions to fix up fonts.
There are some suggestions to fix some of the layout and functional things, so I'll see what I get to with that.

I have done some testing of the website on different browsers here are the results:
Safari seems to work best.  No major problems and runs fast.
Firefox.  a little slower.  At school the browser completely freezes up when you try to print from Flash.  Lame.  Works fine at home though.
Chrome. Runs a little slow but it looks like everything works.
IE.  Meh, at school it just tells me that it needs to update the flash player.  So I updated the flash player and, big surprise, no difference.  When is the internet explorer 9 coming out allready?
Posted by Michael Mohler at 10:17 AM No comments:

The web page surrounding the flash movies was never meant to be anything to impressive, mostly just a holder.

I started working on that simple web page again today.  A while back I thought it would be nice if people could make comments at each animal page, but I had not done much about it.  So today I gave it a try.  I started by putting my flash page online, which was easier than I expected.  The page also ran better than I expected it to online.
I tried putting the flash movies into joomla page because it would be an easy way to allow users to make comments, but they ran very poorly so I scrapped that idea.

I searched online and found this comment box page that lets you make a nice comment box in your html page and you manage it with your gmail account.  So with a little bit of work I managed to run a test in which I load these comment boxes in my single web page using an iFrame that is activated by the flash movies.  This way each animal should have its own comment page set right under it.  I tried a couple of these online and it seems like it works perfectly.  So i need to do some styling and then throw it in with the rest of the pages.  It looks very promising.
Posted by Michael Mohler at 10:07 AM No comments:

The builder is now pretty much finished.

Today I am adding in the text and content for chatting with the animals.  Simple stuff, nothing very complicated.
I also realized the other day that I am getting less useless with programming code.  I am still not very good, but I have gotten to the point where I can make some simple stuff work and it doesn't take days to do it. 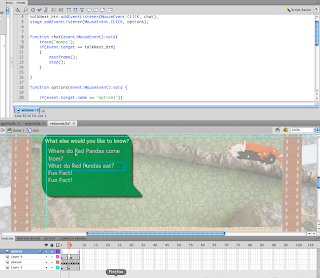 Posted by Michael Mohler at 5:14 AM No comments: